What Are Free or Public Proxies?

Where do public proxies come from?

Second example: An Internet user downloads a program that contains a security hole and cannot be updated because the copy protection has been removed (“cracked software”) or a Trojan has been installed. In this case the private computer becomes a public proxy.

All these servers and private computers are now accessible from the outside. This means that if you know their IPs and the port where the proxy is open, this remote computer can fulfill the function of a proxy, i.e. you can send and receive requests to other servers through it.

The ranges of IP addresses are scanned using programs like Charon, usually from similarly infected servers. Attention: This is illegal and there may be legal consequences for such activities. The IP addresses are then used to send spam via SMTP ports as well as for brute force and DDoS attacks.

After such proxies become unusable (i.e. when their IPs are added to the spam database), they are often published in unrestricted forums.

It is strongly discouraged to use such proxies to transfer important data: e.g. for social networks, instant messengers and especially to conduct financial transactions.

Despite all the risks associated with the use of public proxies, they are in great demand among SEO specialists. Because usually Google does not manage to block them and they can be used to parse search results. 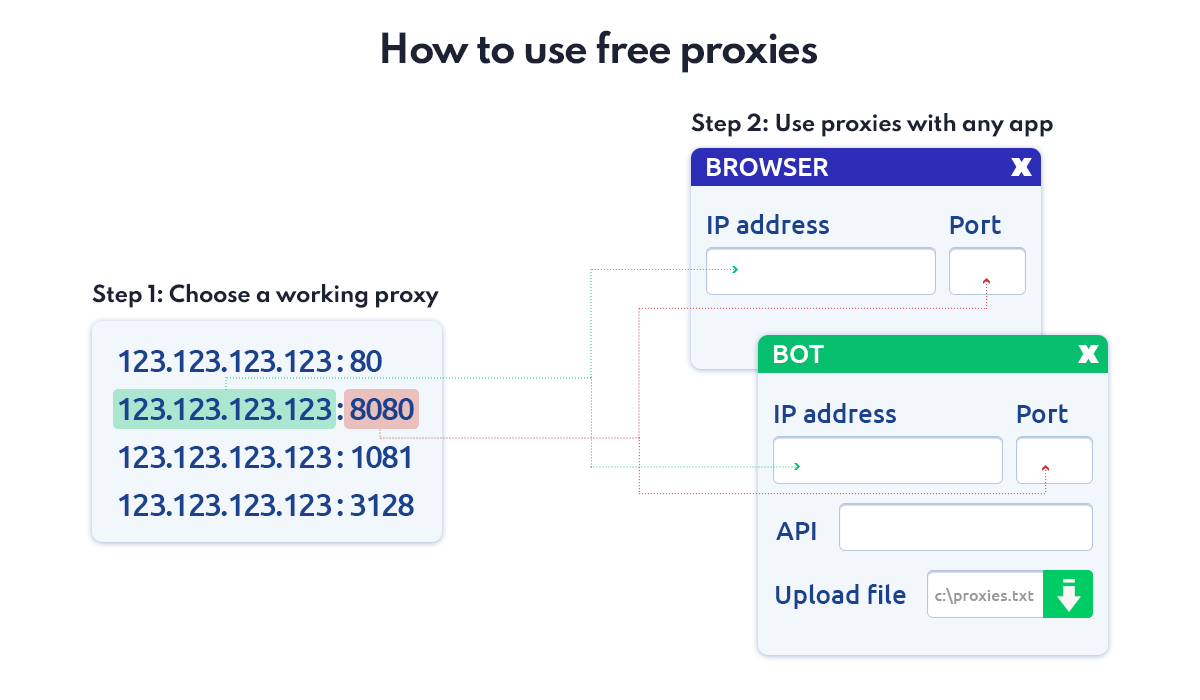 An example of a free proxy list can be found here.

However, there are also online services that offer lists of IP addresses for money. These proxies are usually collected with the help of parsers in well-known proxy forums and other websites.

Prior to the sale, the list is checked for duplicates and availability, sorted by geo-location and protocol and sent to the customer.

Potential buyers of such lists should be aware that services offering such lists have no control over the listed proxy servers. It is impossible to check for which purposes and by how many people such proxies have already been used.

Such proxies typically do not have a long “life span” ̶ usually until the server administrator or computer owner notices an unusually high load and closes the security hole (or simply reinstalls the system).

This website uses cookies to improve your experience while you navigate through the website. Out of these cookies, the cookies that are categorized as necessary are stored on your browser as they are essential for the working of basic functionalities of the website. We also use third-party cookies that help us analyze and understand how you use this website. These cookies will be stored in your browser only with your consent. You also have the option to opt-out of these cookies. But opting out of some of these cookies may have an effect on your browsing experience.
Necessary Always Enabled
Necessary cookies are absolutely essential for the website to function properly. This category only includes cookies that ensures basic functionalities and security features of the website. These cookies do not store any personal information.
Non-necessary
Any cookies that may not be particularly necessary for the website to function and is used specifically to collect user personal data via analytics, ads, other embedded contents are termed as non-necessary cookies. It is mandatory to procure user consent prior to running these cookies on your website.
SAVE & ACCEPT